On the morning of my most recent birthday, I sat up in bed, yawned, and rubbed the sleep out of my eyes.  I walked out to the patio with a cup of coffee, and lo and behold, a $50 bill had sprouted on my money tree. 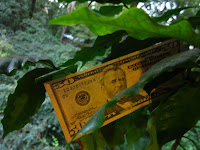 "How far can I stretch $50?" I asked, and decided I'd challenge myself to build a thrifty home aquaponic system.

What is an aquaponic system?

Some benefits of aquaponic gardening include

To build a bare-bones home aquaponic system, I'd need
Some other tools that I thought may come in handy included:
Putting the pieces together

My first step was to fill the aquarium with water and put in the air pump.  The water needed to sit out at least 24 hours to allow chlorine from the tap water to evaporate before it was safe for the fish to live in. After a day passed, I added the fishies.

With the fish in place, the next step was to give the plants some room to grow.  I started out by using a hacksaw to cut a 2-inch section of the 4-inch PVC pipe.  This step takes some patience, but I promise it's possible to finish.  The open section becomes the top of the pipe that the plants will sit in.

Next, I flipped over the PVC pipe and drilled 4 holes on the bottom to one side.  The fourth hole that's closest to the end of the pipe was drilled with the larger 1/16-inch bit, and the other holes were drilled with the smaller 1/8-inch bit.  I recommend starting with only two or three holes and adding more if needed rather than drilling several and having to plug them up when the plants get too dry down the road.

With the channel cut and the holes drilled, it was time to add the end caps.  Although an employee at Lowes assured me that no caulk would be necessary for this part, it is.  I added a line of caulk along the edge of the PVC pipe, then popped the end caps on.

Once the caulk had dried overnight, it was time to start pumping water.  Set the channel on top of the aquarium and partially fill with gravel.  Submerge the fountain pump and run the vinyl tubing up into the channel.  Secure the tubing with gravel inside of the channel.

I added plants, turned on the fountain pump, and the aquaponic system was complete!

The system has been running successfully for 3 weeks now.  I did lose some fishies, but I've also been able to add a couple fancier fish now that the cycling is complete.

For updated information on my bare-bones, home aquaponic system, check out my profile at the Aquaponic Source.

To see more photos of my home aquaponic system, check out my photobucket story.

If you have any questions, comments, ideas, or suggestions, I love to get email!

A special thanks to my Dad for giving me an opportunity to do such a neat project on my birthday!

Promote Your Page Too